There are always many good reasons to visit Goa — some better than others. If you have had your fill of December’s Sunburn lists, wars of DJs and frenetic partying, let restaurants be your raison d’etre to visit the state this year, as we ring out 2022.

Almost three years of the pandemic have changed Goa almost beyond recognition. New Delhi, Mumbai high rollers have now parked themselves, if not permanently, then for large chunks of the year, in Assagao villas, seeking to escape the humdrum Greater ‘Kailashness’ of their earlier lives. The earlier trend of migration from the metros has thus turned into a juggernaut, property prices zipping up, but indelibly altering that signature Goan sussegado state of mind.

These nativised (north) Goans from elsewhere as well as well-heeled domestic tourists who have replaced the erstwhile Israeli backpackers and Russian charters are driving the demand for high quality, even luxury dining in Goa, as it transforms into India’s restaurant capital —a far cry from the laidback outpost it was when Gunpowder first moved in, trading Hauz Khas Village for Assagao in 2012.

Ten years have altered the landscape and tastes; the pace of change quickening through the pandemic. Even now, new restaurateurs and chefs are pouring in, for a share of the sunshine in a market where you can charge as much as the NCR (with the highest per person spend in the country), without diners looking overtly at the menu’s right side nervously.

On my flight from New Delhi alone there are three chefs, and one interior designer handling restaurant projects. All roads lead to Assagao. “This year alone, we are hearing, almost 600 new restaurants opened in Goa… obviously many will not survive”, warns restaurateur Ashish Kapur of Antares, in Goa for seven years, and one of the first national-level restaurateurs to take to the State.

Twenty years ago, when I had first encountered Goa, it was at Mrs Fernandes’ pensione in Miramar, eating her egg and fish curries, picking up poi, bebinca or pasteis de nata from bakeries of the South, spending a pittance on long kingfish lunches in cafes lining the Mandovi. On some days, we would catch the bus to the beaches of the North, but hitch hike back since there was no public transport available post sunset.

Now, there are traffic jams. The restaurant scene is buzzing, generating more jobs and revenue from tourists. Only, as the locals point out, that relaxed ‘Goa-ness’ that made the state unique is being lost..

Rohit Khattar, arguably India’s most successful restaurateur, has just opened Hosa, a world-class South Indian restaurant in Siolem. Hosa is ensconced in a beautiful heritage home, adjacent to a creek and a church, and filled with serious art curated by Chennai-based Apparao Galleries, from Ravinder Reddy to Thota Vaikuntham. “Even if one sells, that may make more money than the food”, jokes Rohit, as we tour the many rooms the dining space is broken into; its centrepiece a gorgeous bar, high arches, chandeliers and all. This is not your quintessential “Goa”, of T-shirts and shorts. Guests dress up for chef Suresh DC dinners, which are a deep dive into the cuisines of the five peninsular states, presented with deceptive ease. “I did not want this to be another Indian Accent, I wanted it to be somewhere between Indian Accent and Comorin (his bar-led more casual restaurant in Gurgaon)”, says Rohit. Suresh’s plates show off detailed nuances into regional southern Indian without the formality of other similar deeply-researched icons — Southern Spice, Dakshin or Karavalli, all hotel restaurants.

Suresh serves us snapper carpaccio, accented with curry leaf oil, served with a “rasa” of sol kadi (a dish more elevated than similar ceviche with sol kadi done memorably by the late Floyd Cardoz),a playful curd rice with “cashew 65”, and a whole range of breads such as  nool parotta that can be pulled up by its strings or  akki roti served under gravied-vada inspired by his mother’s cooking.

The cocktails upgrade nostalgia: modern rum-and-(kokum) cola, beer shandy as well as a whole host of internationally chic low/no alcohol sodas, tonics and infusions by Comorin’s feted Varun Sharma, who is Hosa’s mixologist too. Nothing is laboured. But all is “serious” in terms of craft and ambition.

That luxury dining is on an upswing in Goa is also borne out by Taj Fort Aguada, the earliest luxury player in Goa, pivoting to launch the high wattage Milanese restaurant brand, Papermoon (that also debuted in London at the Churchill-era Old War Office building this October) here, instead of Delhi-Mumbai. This winter, however,  has seen some dip in the restaurant business, people in the industry say, because of the clutter in the market and because domestic tourists are now travelling internationally too unlike in the last two years.

However, new entrants are undeterred, betting on quality of food and drink to differentiate themselves. “A massive change has happened in what people are now seeking from Goa,” says Rakshay Dhariwal of Jamun and Saz by the Beach. “Earlier, it was all about the nightlife…Titos, Club Cubana etc. Today, people aren’t coming to party, they are coming to dine. You have all the best restaurants from all Indian cities and you have fabulous local places … none of the holiday homes, which would lie idle before the pandemic, are unused now. You have a large influx of non-Goans with huge disposable incomes, who go out very often,” adds Rakshay who opened his spaces a few years before the pandemic.

Local, amidst the vocal

While brands and restaurateurs/chefs from other cities are making their debuts — the latest is Chennai’s Koox, in a sprawling, lush space in Vagator — local businesses too are upping their game. The result is a mature market that is a melting pot of all sorts of formats, some that you would be hard put to find even in New Delhi, Mumbai and Bengaluru.

Foodies will already know of restaurants like Cavatina (Goan food in a contemporary format) but there are other local “must” experiences. Sopo (Konkani for “the lazy bench”) by artist Siddharth Kerkar, Subodh Kerkar’s son, serves Burmese and displays contemporary pieces of art.  There (that’s the name of the restaurant owned by Alton Desouza) in Mapusa sits in a charming field, with Chef Christopher Fernandes(“Chris”) turning out perhaps the best cured, grilled meats in the country. Settle down with the perfect plate of brisket with a local Goan gin for brunch. Miguel’s in Panjim is an experience too — Art-Deco inspired cocktail bar set in a heritage building , drawing inspiration from Fontainhas, and serving Konkani-Portuguese fusion bites. In Assagao, wedding and tech entrepreneur Ginny Kohli has recently opened Guilte, another niche cocktail bar with batched drinks and one shot martinis (including a bacon flavoured one). Ashish Kapur, meanwhile, is building a boutique hotel called Mademoiselle (to be run by women-only) with French-style boulangerie and patisserie: “Amid the Delhi-Mumbai influx, Goa’s European-ess is lost, I want to bring that back,” he says.

Goa had long ceased to be a hippie paradise, but a new hipster vibe is more than apparent too as young chefs, creative entrepreneurs and arty émigrés have taken refuge here.

As a friend takes me around his “beat” (every region of Goa is a distinct beat, from heritage Panjim and old Goa to Dona Paula where the country’s top four bartenders and barprenuers live in adjacent houses playing badminton every morning to the beach bars of the north) I hear of holistic lifestyles featuring 4 am clubs (people who wake up early), “shalas” (yoga shalas), breath work (not  pranayam), and cafes such as Mojigao with freshly brewed coffee and tapas set on an undulating green hillside that is haunt of the creative types. I meet actress turned entreprenuer Pooja Bedi, who runs a wellness café, and is now working on a wellness centre with yoga in the pool  and a healthy gin bar. There’s Priya Thakur, behind the Manali and Ladakh Larisa chain of eco resorts, who has set up a boutique hotel in Ashwem, set in an orchard she has planted herself, with bamboo showers and outdoor baths. “Once the vegetable garden get going, guests can pluck what they like and our chefs will cook it”, she says. Priya turned to Goa after her film producer husband Ronnie Lahiri (behind movies such as Madras Café, Vicky Donor, Piku) was stuck in Mumbai through the lockdown and decided to relocate to Goa to be amidst nature.

Lawyer- turned-chef Sai Sabnis, who has studied Ayurveda, Chinese medicine, immunity building, is rolling out a new mindful food concept called Sana, near Artjuna (a Portuguese style café focussed on wellness) in Anjuna. She calls me “to my cute corner for sunset by the fields” though the place is yet to open to the public. There is just another level of boho-chic in Goa. An intrepid traveller may want to keep coming back, because as Farhad Mehta, Pune boy who settled in Goa this year as a “W insider”, curating experiences for hotel guests, remarks: “People come looking for different experiences in different seasons. In December, it may be parties, and I will be expected to get them to the most happening events but monsoon is different, March, another crowd.”

As I sit for my only Goan meal of a week in Goa at the new Avo’s Kitchen in Assagao, which maintains a Goa vibe while not being a shack — and dig into a sumptuous fish thali with  chonak,  tisre and an extra plate of  kismoor, I decide whatever the season, food is the reason to be here.

Fri Dec 2 , 2022
DOHA, Qatar – Thirty-six years later, Jamie Lowery is back at the World Cup. Lowery, one of two amateurs on the Canadian team that played at the 1986 World Cup in Mexico, has returned to the soccer showcase, this time as a fan with a group of eight […] 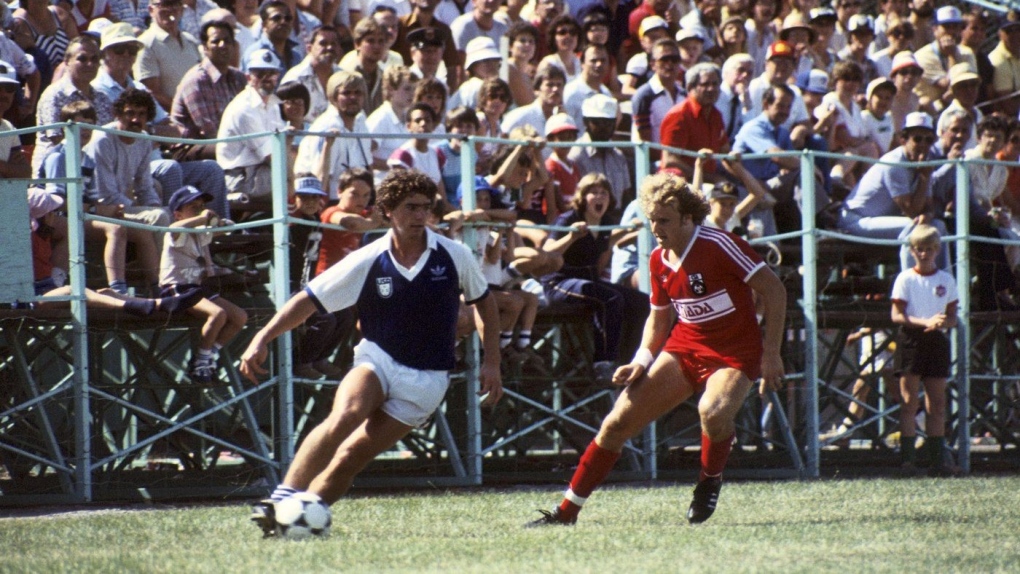